It is the dentistry speciality which focuses on preventing and treating gum diseases.

GINGIVITIS is an inflammation of the gum which presents with gum redness and bleeding when brushing or spontaneously.

It generally occurs due to the accumulation of plaque which is not removed when brushing teeth. A simple dental cleaning can be used to treat the disease and reverse it at this stage; otherwise, it can evolve into a periodontitis.

PERIODONTITIS OR PYORRHEA affects the tissues around the teeth. It provokes a progressive destruction of the periodontal ligament, of the gums and of the alveolar bone, even leading to the formation of periodontal pockets.

It is the most important cause of tooth mobility and loss nowadays.

Apart from the genetic basis and the bacteria, there are other secondary factors which, despite not causing the disease, have an influence on its evolution; among them stand out: smoking, stress, certain systemic diseases (diabetes and hypertension), habits such as bruxism and the way of biting.

Signs that make it advisable to visit the periodontist

It is very important to know that a healthy gum does not bleed.

How are they diagnosed?

The most common symptom is bleeding, either spontaneously or when brushing, although it is less evident in smoking patients.

A clinical or x-ray examination allows the periodontist to diagnose the type of infection and prepare a personalised treatment plan to cure periodontitis.

Unlike what people think, periodontitis does have a treatment which has as its aim to slow down the progression of the disease and thus avoid the loss of teeth.

Different treatments will be performed according to the stage of the disease:

2.- Initial periodontitis: root scaling and planing or curettage; it consists in removing the tartar located below the gum using a specific set of instruments without surgery.

3.- Moderate or advanced periodontitis: periodontal surgery, which allows us to completely remove the tartar, the (infectious) granulation tissue and even to regenerate small bone defects.

Whatever the treatment, success can only be ensured by visiting the periodontist or hygienist periodically, with more or less frequent visits depending on the seriousness of the disease. 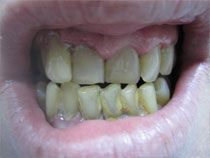 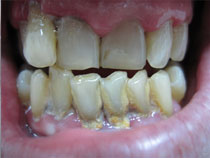 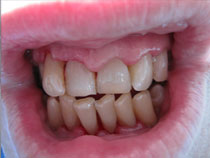 Everything that there is to know about periodontitis

It is not associated with age.

More than half of the Spanish population has gingivitis and 1 out of 3 persons older than 35 has periodontitis.

It can be contagious for predisposed persons.

Periodontitis can be treated.

90% of the causes of halitosis or bad breath originate in the mouth and not in the stomach, as it is commonly believed.

If it has an oral origin, it might be related to periodontal diseases, namely: gingivitis and periodontitis.

The periodontist is the most qualified professional to define the origin and causes of halitosis and to eliminate it.